Show me directions to The Original Cockney Museum

The Original Cockney Museum is also mobile! We are touring this year throughout the UK.

The desire to create such a museum was stimulated in George following a successful long search for the COCKNEY CROWN JEWELS, a collection of Pearly Kings and Queens Suites and other artefacts dating back 139 years. Following this acquisition a temporary display in Stoneleigh Surrey for a period of 2 weeks was undertaken and in 1 week they achieved 12,000 visitors. The display formed the basis of the concept of the Cockney Museum.

Street Traders, or Costermongers as they became known, have been an important feature of London life since the 11th century. For most of the time they were unlicensed and itinerant and at times hounded by the authorities and Bureaucracy. They cried their wares to attract customers' with vigour and panache, much to the annoyance of London's well-to-do society. However they provided an essential service to London's poor and mostly sold their wares in small quantities around the streets &amp;amp; alleyways. They would start with baskets then barrows and eventually permanent static pitches.

London grew up not just around its financial market, but around its famous markets that provided the necessities of life-markets such as Billingsgate (where the fish was landed), Smithfield (for cattle and live stock) and Covent Garden and Spitalfields (for fruit, veg flowers ). Although each Coster family traded independently, they remained loyal to each other costers- collecting for those that fell on particularly hard times. Their philosophy life was one of fate, some you win- some you lose and they liked a gamble-be it on boxing matches, pigeon racing, dog fighting and even rat-killing matches! Most of all, of course, they liked to indulge in a tipple or two, not because they enjoyed, a good old booze-up and a sing-song you understand but more to do with being suspicious of water given the prevalence of cholera and typhoid. In any event the Ale Houses, Gin Palaces and the Penny Gaff Music Halls were warm &amp;amp; welcoming compared to their squalid lodgings.

Most of London's poorer working classes were hoarded together outside the thriving City. Dockers, sailors, immigrants &amp;amp; and factory girls all lived in slum conditions with little or no sanitation. As London grew beyond the boundaries of the walled City costermongers in each Borough became COSTER KINGS. They were chosen to fight for their rights and hence were an early form of trade unions. Coster Kings needed to be a hardy breed with leadership qualities, strong personalities, and physical strength, loyal and quick-witted. Coster Kings and Queens brought up their Royal children to follow in the tradition and inherited their titles.

Costers admired style and panache and they evolved a showmanship and cheeky banter that boosted their custom. They also developed their own secret language, Coster back-slang, which pre-dated Cockney rhyming slang, and they used it to good effect, confusing their punters and the police when wanted! With typical coster cheek they imitated the wealthy West End society who by the early 19th century had developed a fashion for wearing Pearls. The costers took it one step further by sewing lines of pearls on their battered hand-me -down waistcoats, caps and working trousers.

The transformation to the complete Pearly Costume as we know them today finally came in the 1880′s when a road sweeper and rat -catcher by the name of Henry Croft completely smothered a worn out dress suit and top hat with smoked pearl buttons, incorporating patterns, symbols slogans. One of which was ALL FOR CHARITY. Henry was a lifelong friend of the costers and he was particularly influenced by their outlook on life concerning helping one another and those less well of, even if you had little yourself. He joined the costers on their hospital fund raising Parades and carnivals and it wasn't long before all of the Costers Kings and Queens from London's 28 Boroughs produced their own Pearly Costumes, realising that their shimmering outfits delighted onlookers and worked wonders in raising for the poor sick and needy. While Pearly Kings and their Princes decorated their caps, Pearly Queens and and their Princesses wore ostrich feathers a bobby-dazzler earrings!

The Pearly attitude to life is one of pride- not just to raise money, but to dispense it in true Cockney spirit, good heartedly and without the recipient being made to feel humiliated.

This travelling museum even though small is full of interesting items and fascinating facts. The couple who own this are very friendly and a genuine couple. The pearly costumes are really lovely. Been here a couple of times and always enjoy myself.

Leave your review of The Original Cockney Museum 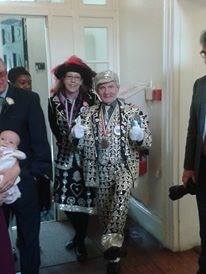 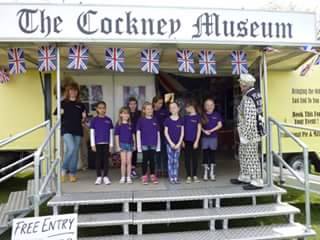