Show me directions to Haslemere Hall

Haslemere Hall a fully equipped theatre seating approximately 340 in a main auditorium, there are regular cinema showings of recent films, and a licensed bar

Haslemere Hall a 100 years of entertainment

Haslemere, with a modest population of about 15,000, is extremely fortunate to possess such a building as Haslemere Hall. It is a fully equipped theatre seating approximately 340 in a main Auditorium with upper Balcony. The large stage has facilities for flying scenery and there is a modern computer controlled lighting and sound system. There are ample backstage dressing rooms, Green Room etc. As a multipurpose building it is also used for lectures, meetings etc. There are regular cinema showings of recent films, and there is a licensed bar.

This was all made possible by a local benefactor by the name of Barclay Lewis Day , who was living in Haslemere back in 1912. He decided to build a Hall with his own money, and he invited well known architects to submit their plans in a competition for the best design.

The competition was judged by a prominent member of the Royal Institute of British Architects, and the winning design was by Annesley Brownrigg F.R.I.B.A. A firm of architects bearing his name still practices in Guildford to this day. The early 1900s saw the tail end of the William Morris , and Arts and Crafts Movement in England , and the design reflects this influence. There is a particularly fine curved stone staircase leading to the upper Rotunda sitting out area, and Balcony.

Building work started in 1912 and the Hall was officially opened in January 1914.

The opening coincided with the outbreak of World War I and for the first four years of its life the Hall was requisitioned by the War Office and used as drill hall for the troops . At the end of the war in 1918 Barclay Day announced that he was presenting the Hall “ to the people of Haslemere", as a gift. A plaque at the base of the staircase commemorates this most generous gift.

Ever since then the Hall has been run completely independently by a Board Of Trustees set up originally by the then Ministry Of Education. The Trustees are representative of the Civil, Religious, and Educational life of the town and its various performing Societies.

The Hall receives no endowments or State Grants. Until recently its only source of income came from lettings to those who want to use the Hall and from individual “Friends of Haslemere Hall". There is a small Annual Grant from the Local Authority but in recent years this been cut back. However, with the demise of the Rex cinema in Haslemere, the Trustees decided to introduce film shows in conjunction with Southern Cinema Services, on several days each month. All the latest releases are shown and the income from this activity has been of enormous help in ensuring the Hall's continuing viability.

A building that is now 100 years of old is constantly requiring attention in the form of repairs and renewals. Improvements and modernisation work are undertaken as funds permit . To this end the “Friends of Haslemere Hall" has been set up to which all those who wish to contribute as subscribers , may do so. The Trustees are always mindful of their responsibility and obligation to maintain the Hall, and of their debt to Barclay Day who provided such a valuable amenity for the future generations of Haslemere citizens.

Live shows from around the world shown in Haslemere

Thanks to technology available today, cinema audiences all over the world (and now Haslemere!) are able to enjoy live performances in their local towns, often for a fraction of the cost, while still feeling part of the experience, as if they were really there. Whether it is Theatre, Ballet, Opera or a Pop Concert, the idea is that you should feel ‘transported' from your seat in the Haslemere Hall, as if you were sat right there in the O2 arena, the Bolshoi, The National Theatre or the Royal Albert Hall. This is achieved through clever use of filming from multiple camera angles, in High Definition) and high quality Dolby surround sound transmission – all beamed live via satellite.

The shows, events and performances originate from a wide variety of venues and production companies from the UK and worldwide, including the UK's very own National Theatre, who have launched a groundbreaking initiative (NTLive) to broadcast the best of British theatre to cinemas around the world.

On several days each month the Hall is transformed into a Cinema showing all the latest releases, using the latest digital technology giving the best picture and Dolby surround sound. See www.haslemerehall.com for more details

Leave your review of Haslemere Hall 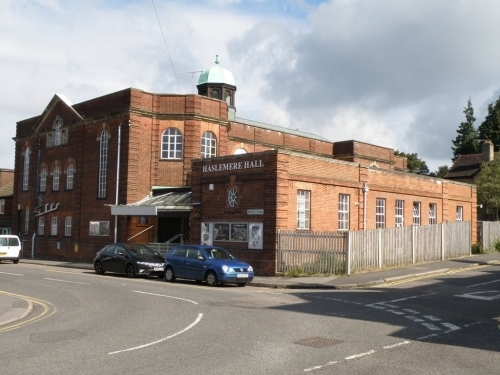