The World of James Herriot

Show me directions to The World of James Herriot

After a £1.4 million investment and its grand opening in 1999 The World of James Herriot has attracted over half million visitors from around the globe - showcasing the life and times of one Yorkshires best loved authors Alf Wight.

A dedicated number of volunteers are always available to share their knowledge with visitors providing an insight into the life of a vet in the 1940's at this unique visitor's attraction.

Set in the picturesque market town of Thirsk, 23 Kirkgate is home to the world famous vet-cum-author James Herriot. Today you can step back in time and experience the life of a vet and see what has made James Herriot into a global phenomenon.

Come and get behind the scenes of the BBC series, and see what has been capturing the hearts and minds of so many around the world, all the while putting Yorkshire firmly on the map.

James Alfred Wight, who wrote under the pseudonym of James Herriot, became one of the most popular writers of the twentieth century. His books, a series of stories based on his experiences as a young veterinary surgeon working among the farming community of North Yorkshire, sold in their millions throughout the world. Their great success spawned two feature films in the mid 1970s, followed by a BBC television series, All Creatures Great and Small, which enjoyed global success in the late 1970s and early 80s. Most recently a TV series was commissioned showing the life and times of James Herriot in his younger days.

Alfred Wight died in 1995 but his books still sell, the television series is still played throughout the world. In 1999 Hambleton District Council invested £1.4 million and established The World of James Herriot in Thirsk, North Yorkshire. Since it's opening - the centre has attracted over half million visitors worldwide. It continues to attract people far and wide, looking to get an insight into the life of Yorkshires best loved author.

Leave your review of The World of James Herriot 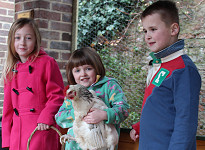 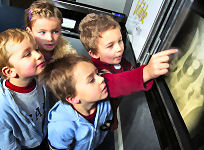 Now come and see where James Herriot, the world's most famous vet, lived, worked and relaxed. See his home and surgery in Thirsk; travel back in time to what life was like when James was a vet in Yorkshire. See the car he drove, step into the TV set, try

The World of James Herriot